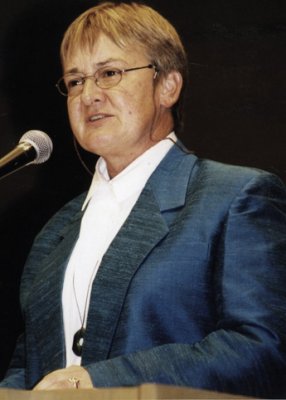 The College is proud to have as its non Maori patron, Professor Marilyn Waring an outstanding feminist leader who has made a major contribution in numerous fields and in many aspects of public life both nationally and internationally.

Marilyn Waring (born 1952) is a New Zealand feminist , an activist for "female human rights", an author and an academic. She holds a PhD in political economy .

A member of the conservative National Party, she became the youngest member in the New Zealand Parliament in 1975, at the age of 22; and remained in the House of Representatives until 1984 . At the time of her election, she was only the fifteenth woman elected as a Member of Parliament in New Zealand. As of 2006, Marilyn works as a Professor of Public Policy at the Institute of Public Policy at AUT University in Auckland, New Zealand. She has held Fellowships at Harvard and Rutgers Universities. She is a member of the Board of the Reserve Bank of New Zealand .

Marilyn has worked as a consultant for organizations such as the Food and Agriculture Organization (FAO), the UNIFEM (United Nations Development Fund for Women), the Yukon Territorial Government, the Ford Foundation , and the Ontario Provincial Government. Marilyn's recent work has focused on women's work as an issue of international human rights. She has also done activist work on behalf of women imprisoned or denied refugee status because of what she calls "feminist political issues beyond the restricted definitions and practices of international human rights". She became well-known in Canada following a 1995 National Film Board of Canada video documentary on her work, Who's Counting: Sex, Lies and Global Economics.

Marilyn has outspokenly criticised the concept of GDP, the economic measure that became a foundation of the United Nations System of National Accounts (UNSNA) following World War II . She ridicules a system which 'counts oil spills and wars as contributors to economic growth, while child-rearing and housekeeping are deemed valueless'.  Marilyn speaks publicly on gay and lesbian rights, most recently in support of same-sex marriages . Marilyn "came out" as a lesbian herself in the 1970s. (Aldrich p433) She teaches on the wonders of globalization and the success in countries like India or China. She also gives conferences to high schools and is interested in giving one in Latin America due to the recent uprisals of anti-globalization demonstrations. Readings of interest